What a fantastic way to kick off the second half of the 2011 F1 season. The German Grand Prix was a thrilling race with many battles, of which Lewis Hamilton eventually came out on top. After sub-par performances in Canada, Monaco, and Valencia, Hamilton must be absolutely stoked to be at the top step of the podium again. This is his 16th Grand Prix victory, bringing him back on page with Sebastian Vettel. He claimed after the race that his performance was “in his top 5” of his greatest races. 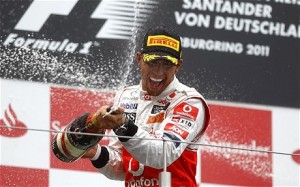 Hamilton enjoys the top step of the podium

Podium at the Nurburgring

Vettel had a challenging day; he was blocked out and passed by Alonso at the start, and had a high-speed spin later in the race. He would eventually finish fourth after passing Massa in the pits. It was the first time he hasn’t been on the podium since Korea of the 2010 season. Massa backed off of Vettel toward the end of the race, but was still able to bring home 5th in his Ferrari.

Massa was not able to challenge Vettel for 4th

Adrian Sutil had a great drive to finish 6th in the race. He didn’t make any mistakes and was consistent throughout the whole race. He was the last car not to be overlapped by the front-runners. 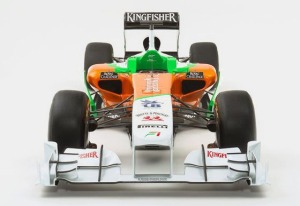 Solid race from Sutil in his VJM04

Mercedes brought their cars home 7th and 8th, with Rosberg heading Schumacher. Rosberg was up into 5th at the start, but could not hold the position and eventually fell back to seventh. Schumacher had a solid race, climbing up a couple of positions to claim 8th place.

Kamui Kobayashi, as usual, put on an overtaking show. He started down in 17th position and was able to climb all the way to 9th. It was a spectacular performance; he never fails to entertain during a race. Rounding out the top ten was Vitaly Petrov, who also moved up a couple of notches.

Kobayashi puts on fireworks display at the Nurburgring

Next came Perez, Alguersauri, di Resta, Maldonado, Buemi, Kovalainen, Glock, d’Ambrosio, Ricciardo, and Chandok. Paul di Resta made a reasonable comeback after being spun on the first lap. It was Karun Chandok’s first race since he was taken out of the HRT race seat mid-season in 2010, and he said the German Grand Prix was a “learning experience” for him. He agreed that his performance was far from perfect, but he said he learned about the Pirelli tires, and Lotus was glad that he “brought home the second car.” 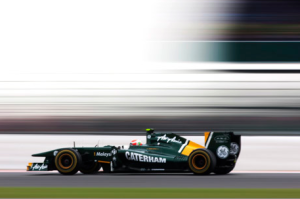 Retirements included Barrichello, Heidfeld, Button, and Liuzzi. Heidfeld had quite a spectacular collision with Buemi, sending him a couple feet into the air. Buemi will suffer a 5 place grid penalty for the collision. Button has claimed that he is not fighting for the championship anymore after his two consecutive retirements, but he will “do the best he can in each race.” It is unfortunate that he has had such bad luck, especially when he was in a position to challenge for podium finishes.

Heidfeld gets airborne after hitting a Toro Rosso

The constructor’s championship remains the same. Mercedes seems to be pulling out a gap over Renault, and Red Bull are still far ahead of the competition. The way things are going currently, Ferrari should be able to pass McLaren before the end of the season. Ferrari have scored more points than any other team in the past two races.

The top 3 in the Constructer's Championship